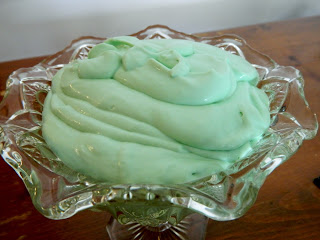 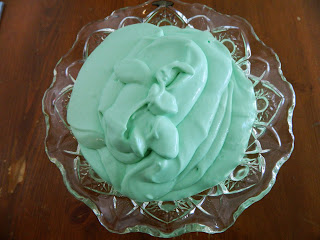 I have a confession to make.  I went to McDonald's yesterday with my husband while we were out and about and I had a Shamrock Shake.  No they don't have a low carb version.  I had the real thing.  Whew! Got that off my chest.  It was a spur of the moment decision, but it was a decision, not a slip beyond my control.  I chose to have it, contemplating the blood sugar rise it would give me, and what I was going to do about that, and reasoned I don't normally do this, and in fact I've hardly been eating any carbs at all some days, mostly pretty ketogenic lately.  It wasn't a craving either.  It was simply a choice because I had a sour stomach, and neither coffee or soda pop appealed to me.  I wasn't there to eat.  Already had lunch.  I was just there to sit and visit with my hubby and relax a bit.  I used to get those Shamrock shakes every year when they came out and loved them!  It's been over 7 years since the last one.  So I decided to have one.  Just one! I'm not going back.  It sounded soothing to the sour stomach.  And it was.  My stomach was better the whole rest of the day.  But today I decided I have to have a low carb Shamrock something for this time of year.  I've done it with kefir shakes in the past which was pretty good.  But I'm going to a fellowship gathering at our church tonight for family time, and we're having lots of food there.  I wanted something I could bring with for myself as I know I won't be partaking in the dessert there.  So I whipped up this Shamrock pudding.  I made the mistake of a little too much mint.  I used 1/4 tsp. and that was pretty strong.  So I would advise 1/8 tsp. which is what I put in the recipe.  A little mint goes a long way!

8 ounces  Philadelphia 1/3 less fat cream cheese -- softened, (You can use full fat, but this is lower cal, and less than 1 g carb)
1 cup  Thai Kitchen coconut milk -- Refrigerated at least a couple hours, better longer, and then just scoop out the hard cream portion at the top of the can. Save liquid at the bottom for other use)
1/2 cup  heavy cream
2 teaspoons  vanilla extract
1/8 teaspoon  peppermint extract -- (or mint--more if you want a stronger mint flavor, but be careful not to get too much as it can be overpowering!)
Liquid sucralose to equal 3/4 cup sweetening power -- (or sweetener of your choice)
20 drops  green food coloring -- (optional)

With electric mixer with wire whisks, whip for a couple minutes or until thick and creamy.  Refrigerate until completely chilled.  Serve with whipped cream if desired.