It's been HOT here lately.  Yesterday it was 103.  Heat like that makes me think of one thing--ICE-CREAM!!  Yes, I was screaming for ice cream.  Unfortunately I didn't have my ice cream freezer ready.  But today I did. 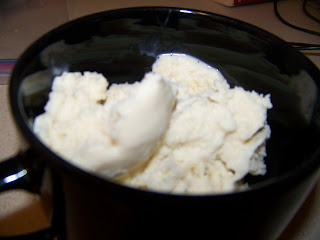 This was an experiment, and one that turned out pretty good actually although it is not going to be scoopable after sitting in the freezer all day.  It was great soft serve right out of the ice cream maker, and it was wonderful a couple hours later also.  But I can tell now when I checked it 6 hrs. later, that it is not going to be scoopable and will have to sit out a bit before eating it. I think tonight it will be part of a root beer float.  Another thing that screams at me on hot days!!  Reminds me of my childhood I guess, and begging my dad to stop at the A&W Root Beer Stand.  What a treat!!

So here's the video I did.  It was rather spur of the moment, as most of my videos tend to be.

In a sauce pan, bring the almond milk and the coconut milk along with all the sweeteners, just to a low boil.  Don't let it boil hard, but when it just starts to bubble take it off the heat.

Temper the egg yolks by slowly drizzling about 1/2 cup of the hot milk into the yolks while whisking vigorously.  Then pour the mixture slowly into the rest of the milk while again whisking. At this point add the vanilla extract.

Stir constantly over a medium low heat until the mixture begins to thicken.  For me it took around 15 to 16 minutes.  When you are done it should coat the spoon.

Remove from the heat and set in a bowl of ice for about 10 minutes stirring all the while.  When it is cool, stir in the kefir and chill another 5 to 10 minutes in the bowl of ice or put in the refrigerator until completely chilled.

Process in your ice cream maker according to directions.