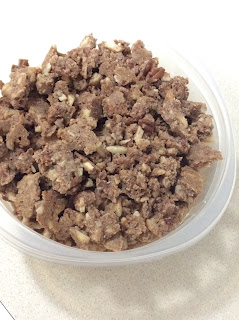 I'd like to pass on a great recipe that I discovered on YouTube recently and tried.  If you've never checked out HomeMade Healthy be sure and do so for some awesome recipes.

I loved this recipe!  I made a larger batch and made some adjustments for myself, just because I always do.  I used what I had on hand and wanted a large batch.  Her recipe is in the notes under her video. I have never really been a granola eater, but I just became one. I had a half cup this morning with a little Cashew milk and it was very filling. I woke up this morning at 4 a.m. before the Rooster crowed and had breakfast and it's 9:30 now and I am not at all hungry.  I plan on heading out to an exercise class this morning at 10:30 so I'm fueled for the morning.

Thank you Lisa and Rob for a great recipe!
Here is my adaptation...

Roughly chop slivered almonds and pecans with a chopper, knife, or in a food processor.

Line a large baking sheet with sides with parchment paper or a silicone mat.  Spread mixture out on pan.

Preheat oven to 300F.  Bake 25 to 30 minutes checking after 20 minutes and baking longer as needed until crisp.  It gets crisper as it cools also.

Cool completely and break up into pieces. Store in ziploc bag or covered storage container.