Chicken Stock, So Good For You!

"Broth is Beautiful" by Sally Fallon, is a good read for those of you out there wanting to make your own Chicken broth.  Nothing like some soothing Chicken broth for a stomach bug.  This week I ended up in the ER.  I won't go into the gross details of my illness, but we thought I was bleeding internally, and so did the Dr. and Nurse until the test for blood came back negative.  What looked like blood was not, thankfully, and we as yet are as puzzled as they as to what it was.  Still waiting on those test results to come back. Nobody else in my family got sick, so even though they passed it off as a stomach "flu", and sent me home, we still don't know what hit me. It was not like any other stomach bug I've ever gotten. I had terrible indigestion for a week and no appetite, so fresh, nourishing, home made chicken broth sure hit the spot. 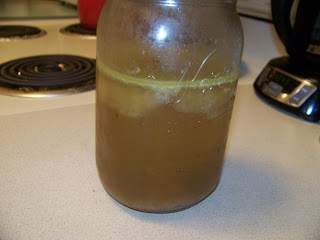 Sally Fallon's recipe for it works great.  I did mine in the crock-pot actually.  I just put it in there with some celery, carrots, green onions, garlic, thyme, salt, and covered it with water.  Unfortunately I forgot to add vinegar, which is supposed to help you get out more calcium from the bones.  Next time.  I do think after reading about the health benefits of Chicken broth, and other bone broths, it will be a staple around here.  No more store bought!  Easy to make really.  And I have all that chicken meat for at least 2 meals besides.

There are many health benefits to good home made stock, and if you do a google you'll find them.  You can check out some more here.

Gelatin for one is one of the advantages that you will not have with store bought stock.  The following is a quote from the above article "Broth is Beautiful"

When broth is cooled, it congeals due to the presence of gelatin. The use of gelatin as a therapeutic agent goes back to the ancient Chinese. Gelatin was probably the first functional food, dating from the invention of the "digestor" by the Frenchman Papin in 1682. Papin's digestor consisted of an apparatus for cooking bones or meat with steam to extract the gelatin. Just as vitamins occupy the center of the stage in nutritional investigations today, so two hundred years ago gelatin held a position in the forefront of food research. Gelatin was universally acclaimed as a most nutritious foodstuff particularly by the French, who were seeking ways to feed their armies and vast numbers of homeless in Paris and other cities. Although gelatin is not a complete protein, containing only the amino acids arginine and glycine in large amounts, it acts as a protein sparer, helping the poor stretch a few morsels of meat into a complete meal. During the siege of Paris, when vegetables and meat were scarce, a doctor named Guerard put his patients on gelatin bouillon with some added fat and they survived in good health.


The French were the leaders in gelatin research, which continued up to the 1950s. Gelatin was found to be useful in the treatment of a long list of diseases including peptic ulcers, tuberculosis, diabetes, muscle diseases, infectious diseases, jaundice and cancer. Babies had fewer digestive problems when gelatin was added to their milk. The American researcher Francis Pottenger pointed out that as gelatin is a hydrophilic colloid, which means that it attracts and holds liquids, it facilitates digestion by attracting digestive juices to food in the gut. Even the epicures recognized that broth-based soup did more than please the taste buds. "Soup is a healthy, light, nourishing food" said Brillant-Savarin, "good for all of humanity; it pleases the stomach, stimulates the appetite and prepares the digestion."


I've read of people having a hard time getting theirs to gel, but I never have.  Maybe using too much water causes that, I don't know.  I don't use as much as most, since I only have so much room in my Crock Pot, to cover with water, so mine is pretty strong, and gels very well.  I just use store bought chicken, the whole chicken, that has no hormones or anything.

Along with this I have been drinking kefir shakes.  I'm slowly returning to normal and the indigestion is going away.  I ate normal food yesterday and felt crummy again so today I'm back to broth and kefir and a little chicken meat along with.  Hopefully my mystery disease will clear up soon and my strength will come back since I have to go back to work for the school on Monday of next week preparing rooms for the new school year.  Other than that, it's been too hot to cook much, and I hope to get back to posting some good recipes soon.

We've had a nice summer together, my husband's first year of retirement, so we've just done some things close to home. Last week before I got sick we did a day trip up to Duluth, MN. along Lake Superior. Got some nice shots of our day...