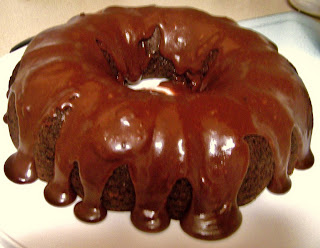 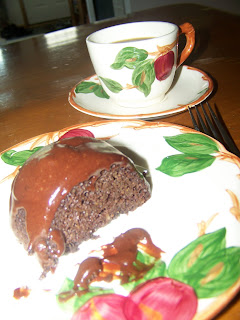 I always loved my mom's chocolate cake and so did everyone else who ever tasted it.  The same cake that my grandma also made, and probably my great grandmother.  I don't know.  It was just handed down.  I have been sick with some crazy virus for over a week and can hardly eat anything, but strangely enough, chocolate is the one thing I'm wanting!  So I tell myself, "Hey self, maybe there's something in chocolate I need right now.  Maybe I should listen to my body".  So I made my mother's chocolate cake this morning with a few adaptations to make it low carb.  The flours I used were a mixture of almond, flaxmeal, carbalose, and wheat protein isolate 5000.  But you can use half almond meal and half flaxmeal is my guess with good results as well, or even try all almond meal.  I may do that next time.  I did like the consistency it came out with.  Sweeteners I used were Splenda, Xylitol,  and Diabetisweet, but you can try your own favorite ones.  Erythritol would work in place of xylitol.  You need either one though to get the same texture and taste with chocolate I think.  I only use small amounts so the amount you get in one helping is minimal so I never have the gastrointestinal problems that way.  Same with the Diabetisweet.
Here's the recipe and the video will come soon.  I need to get to a doctor's appointment to see why I am so dizzy in the head :p and then I'll put together the video.

*Note: To make "powdered sugar", mix 1 cup Splenda and 1/2 cup xylitol in blender, blending and mixing/shaking up, at 10 sec. each time on low speed, until it gets to the consistency of powdered sugar.

Pour into bundt pan.  Bake for 40 to 45 minutes or until cake tests done.  (knife inserted comes out clean and cake is pulling away from the sides of the pan).  Let completely cool, turn out onto a plate and spread on chocolate glaze.

Glaze: Melt butter and chocolate in microwave, 30 sec. at first, and then in 15 sec. intervals, stirring until melted and blended together.  Add vanilla, and powdered sugar substitute.  Pulse with electric mixer slowly until blended, and then slowly mix while adding small amounts of water just until it gets to the right consistency for a glaze.  Mix well, and pour over the top of the cake allowing it to run down the sides and into the middle of the cake.