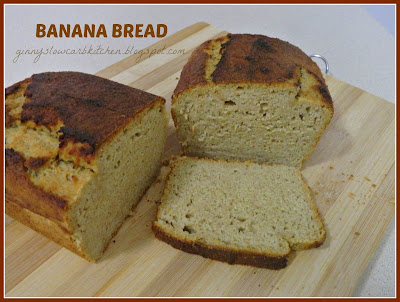 Do you miss banana bread on a low carb diet?  Here's a really good low carb banana bread.  At least I think so.  I hope you will too.  My favorite thing to do with banana bread is slather it with peanut butter.  It's a lunch in itself for me!

It's been quite a while since I made a video where I was in it, and well... I guess I'm a bit out of practice!  I did this on the spur of the moment.  It wasn't a well planned out thing.  It was one of those things where I thought, "hmmm, chilly day, good baking weather. I'm hungry for banana bread. Think I'll make some."  One thing led to another and I thought, "might just as well make a video while I'm doing it and see how it all turns out."  That's the way I live now since being retired. 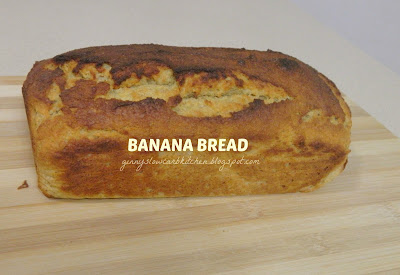 To my delight it turned out really good.  I made a few mistakes in the video, because I'm not a professional video cook.  But all the correct instructions are in the recipe.  You'll see that I forgot the sweetener of all things!!!  Noooooooooooo!  Must have sweetener.  So after I got it all in the pan had to pour it back into the bowl and add my sweetener, which probably deflated my egg whites, but in the end product, it all came together and turned out wonderful.  In fact I think I will do this again as a savory bread by leaving out the sweeteners and extracts and the banana, and add some herbs. I hope if you try it you'll like it.  I know I will make it again.

Preheat oven to 350F.  Place parchment paper in an 8 x 4-inch loaf pan, so that it goes up the sides and hangs over edges, so that it is easy to remove the loaf from the pan. Spray with non-stick spray.

In small bowl add cut up banana and coconut oil and with an immersion blender blend until bananas are pureed and well incorporated with the oil.  Add to dry ingredients.

Pour into prepared loaf pan.  Bake approximately 1 hr. or until it tests done with a toothpick. *SEE NOTE below. Remove from pan by grabbing sides of parchment paper and lifting out onto a wire rack to cool.

Cool completely before cutting. Best cut with an electric knife if you have one.  (Optional) prepare a glaze to pour over the top if desired, by mixing powdered sweetener (I powder Pyure in my coffee grinder), and enough heavy cream until it is the right consistency.

NOTES : *I baked this 1 hour and though it tested done with a toothpick it was a little moist when cut open, but I cut it open warm. Maybe after sitting and cooling some it will be different.  I recommend cutting it completely cooled.  I think I would cover the top with aluminum foil the next time after baking it 45 min. and let it bake an extra 15 minutes for a total of 1 hr. 15 min. baking time.  Very flavorful and good texture and good rise!