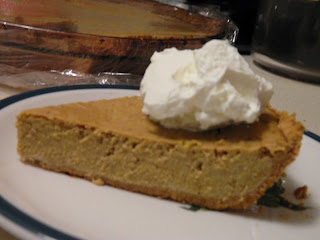 I made this right after Thanksgiving.  It's taken me a while to post it I'm afraid.  Between almost losing my father a couple times, and concern about him, and a recurrence of an old problem for myself which is causing me severe pain again today, it's been a bit hard to think about posting food.  But here I am, standing as I make this post, as it's too painful to sit.  Does anyone out there know anything about Pudendal Nerve Neuralgia?  It's no fun. I thought I was over it, but it surprised me and came back after 5 years.  The funny (funny as in strange, not "haha") thing about it is that the day I was scheduled to have a nerve block because the pain was unbearable, my son died and as soon as I received the news that my son died, my pain was gone.  God's grace? Shock causing another pain to override this pain?  It's a mystery.  Here it is just days after the anniversary of our son's death and the pain has returned.  It is worsened by sitting or certain exercises.  I won't bore you with it all, but suffice it to say I may not be posting as often until I get this under control once again, if possible.  Hopefully that doesn't mean having to make a trip to the specialist I saw before and go through the terrible embarrassing tests and treatment.  Hopefully I can use the same natural and self-care remedies that worked for me before.  But again, since sitting is the main thing I cannot do, sitting in front of the computer and posting won't happen very often right now.  But, I can stand up with my computer on the counter top :) which is probably better for me. I won't spend as much time on it.

This was a delightfully good pie.  I guess it just tastes very much like pumpkin pie.  So if you like pumpkin pie, (and who doesn't?) then you will like this pie.  A wonderful lady who brings her toddler grandson to one of my classes gave me a big beautiful butternut squash and this is one of the things I made with it.  The recipe is simply my adaptation of the recipe on the back of Libby's Pumpkin.  I like the creaminess that the Nestle Table Creme gives to this.  It is much the same consistency of evaporated milk.  I give the sweeteners I used but you can use whatever you have available and like to use.  All Swerve if you have it, or all Truvia, or Splenda Granular, or liquid sucralose, or a combo of all.  I like using a combo of sweeteners.  It seems to give a better taste.  I finally tried the Swerve which seems to be all the rave right now, and it is good, and easier to bake with, but it is way too expensive for me to use regularly.  I bought some when there was a sale, and then it was still too pricey for me.  Truvia is cheaper and easier to get for me, so that's why I use it a lot.  I combine it many times with liquid sucralose because I got a nice size bottle of that pretty cheap on ebay.  Whatever works for you and you like, should work in this.

Crust: In 9 or 10-inch pie plate, add almond flour, flaxseed meal, whey isolate, and Truvia, and stir together. Pour in melted coconut oil and stir together until mixture is crumbly.  Press into pie plate on bottom and up sides.

Preheat oven to 425F.  Bake 15 minutes and then turn oven down to 350F and bake for 40 to 50 minutes longer.  Cool on wire rack and then refrigerate.  Top with whipped cream if desired.